Watch: Herman Narula at Google Cloud Next ’17 on applying SpatialOS beyond gaming

The address covered the topic of the SpatialOS Games Innovation Program with Google Cloud that allows game developer teams of any size to begin building enormous persistent worlds for their games in Unity and experimentally in Unreal Engine.

Importantly, the speech was a chance to talk about the non-gaming applications of SpatialOS as a distributed systems technology for gaining a better understanding of complex real-world challenges.

You can watch the speech above or on the Improbable YouTube channel. The Next Wave of Cloud Innovation

Read on for the script of Herman’s speech:

“If we want to build massive, gigantic simulations of virtual worlds, or completely new ways of modelling cities, or cells, or economies – huge simulations that run on thousands of cores – it’s a real challenge today.

It’s a field that previously has only been available to people with supercomputers and it generally presents a challenging programming model for developers. You’ve got to manage servers. You’ve got to cope with the synchronisation of information. You’ve got to do so many things beyond just building your application.

At Improbable we’ve built a distributed operating system that we call SpatialOS. It runs on Google Cloud and makes it possible to build these kinds of applications – exactly the types of virtual worlds and massive simulations that we’ve all dreamed of – but puts them into the hands of developers so that they can be iterated on and built quickly and efficiently.

At the end of last year, we announced a massive innovation program with Google which makes it almost completely free for hundreds of game studios to build completely new applications on top of SpatialOS. And though this first program was targeted at gaming and it has only being a couple of months since the announcement, there’s already been an enormous number of really cool products produced.

These include virtual worlds like Worlds Adrift, which is 2000 square kilometres in size. Worlds with their own ecologies, worlds with massive numbers of players sharing the same space – no more sharding, no more separation. These are experiences that in many cases have been built by teams of 3-5 developers and our data is live and active right now. With the community, we’re continually improving and adding to what SpatialOS can do for gaming. 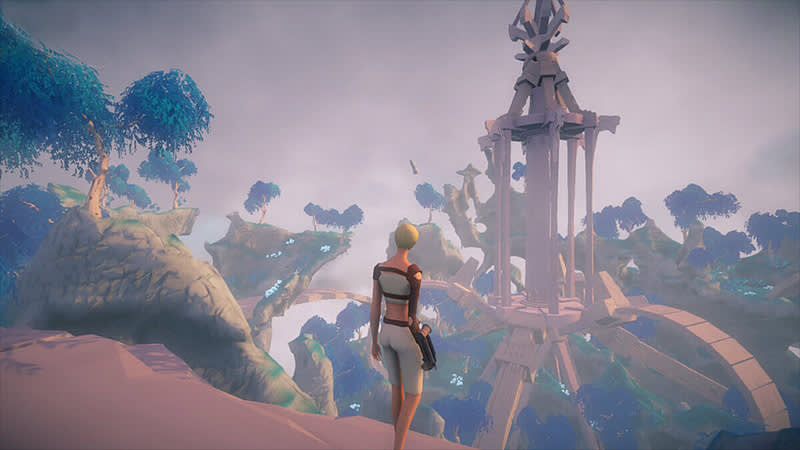 “But today I’m actually here to talk to you about the next step. So, when thinking about large-scale simulation as a way of solving problems, a good way to begin is to think of an example, to think about the most important decision that a company or government makes.

Let’s take an example of what that could look like. Imagine thinking about how to change a massive cellular network that spans a city or entire country. Any change you might think of making, whether it’s a modification to the infrastructure, a change to a protocol or an alteration in policy, is going to have millions of cascading effects which are incredibly difficult to comprehend or think about. The reason for this is that we’re dealing really with emergent systems and this is the idea that I want to put across today. The idea that our world, the cells in your body, our economies, the big infrastructure that we’ve built together, all represent millions of complex emergent systems.

If we really want to understand these systems, we have to go a lot further than just using machine-learning or past-data. We need to learn to completely recreate these systems in their entirety. I mean, actually replicating entire cities on massive simulations. Building models of these networks that have never been possible before. This is a gigantic and daunting technical challenge – it can’t be solved large-scale parallel systems – we need to build new kinds of semi-parallel distributed systems that can make this stuff work.

If we really want to understand these systems, we have to go a lot further than just using machine-learning or past-data. We need to learn to completely recreate these systems in their entirety.

If we really want to change our worlds we need developers like you to be able to run these systems in real-time, build new builds, and build new services that run on top of this stuff – and that’s precisely what we’ve being doing with SpatialOS.

Just like Google – with the spirit of open open-development and sharing content – we intend to do everything we can to foster a community where developers can share code, share their framework, share integrations and start to build and create new services and businesses. We don’t all have to start from scratch – we can start to create an ecosystem to make this stuff possible.

That’s why we’ve chosen to partner with Google. We truly believe that the Cloud is not going to be a zero-sum game and the age of closed systems and trying to, in effect, hot-house developers into committing to a closed ecosystem are over. We can’t succeed unless you succeed and I think Google recognises that – and that’s the genuine reason why i’m here today and why we’ve chosen to make this partnership happen.

So I’ve talked a lot about what’s possible but I haven’t shown you anything really cool yet. I want show you something we built in conjunction with a Public Sector partner.

This is the largest simulation of its kind, ever created.

It’s a complete simulation of an entire British city; its telco-network, its power grid, its transport network, its sewage systems, its housing demographics, even the way in which people move around and interact with the city. We’re going to be open-sourcing some of this content later this year. This runs on thousands of cores and it’s able to run in real-time using Unity for visualisation and interaction with the simulation.

My contention to you today is that this is the future of how we’re going to look at how all the systems in our world operate. Not just looking at past-data but recreating them, rethinking how we can make these “what-if?” decisions. There are even companies that are beginning to use SpatialOS to run systems of autonomous vehicles and managing them as fleets.

So I want to leave you with an idea. The idea of “AI” is something that Google talks about it all the time – you can’t go on TechCrunch without seeing an AI article – but the idea of “Recreating Reality” – building reality-scale simulations and services – is just as important and I believe it’s going to underpin how our world is going to transform, whether it’s simulations of tumours in cells that can help us understand disease, or models of infrastructure that can help us save money and make better choices.

With your help and the ability to build an open community on our technology, we hope to kick-start this. If you’re excited, please check out what we have online, you can download our SDK right now and get started making games – thank you.”