SpatialOS enables developers to alter their game design easily, before and after launch.

Key to a successful online game is adaptability. The biggest online games today aren’t fire-and-forget - they’re not released into the wilds and left to die. They’re games-as-services, supported from day one with new content - that is, expansions, maps, skins, weapons, emotes, dances, hats, pets and so on. Not only do developers have to create a stonking game at launch, but they need to generate endless smart additions that tie neatly together to enhance the game.

Think of Epic’s Fortnite. It started as a small-scale PvE fort builder sold on a premium Early Access model. The Epic team made a smart call and rapidly pivoted the design, adding a free hundred-person Battle Royale mode in just two months and then updating it constantly, including adding a mobile version. Inarguably, this contributed to the game’s huge ongoing success - over 250 million people have played it. Of course, not everyone can change design like this - few developers have Epic’s resources to change a game, or its teams’ knowledge and skill to do it quickly.

But that ease of alteration is a key part of the appeal of SpatialOS. We believe the key to a successful game is being able to vary all your game elements quickly, without your architecture locking you to a single path.

For this reason, SpatialOS enables easy playtesting on the exact same cloud hardware your game will run on at release, so you can test game designs and get player feedback to find the fun from day one of development. Our testing environment is so simple to use out of the box that daily updates and tests are not a problem, allowing you to improve, adapt or drop gameplay features rapidly. 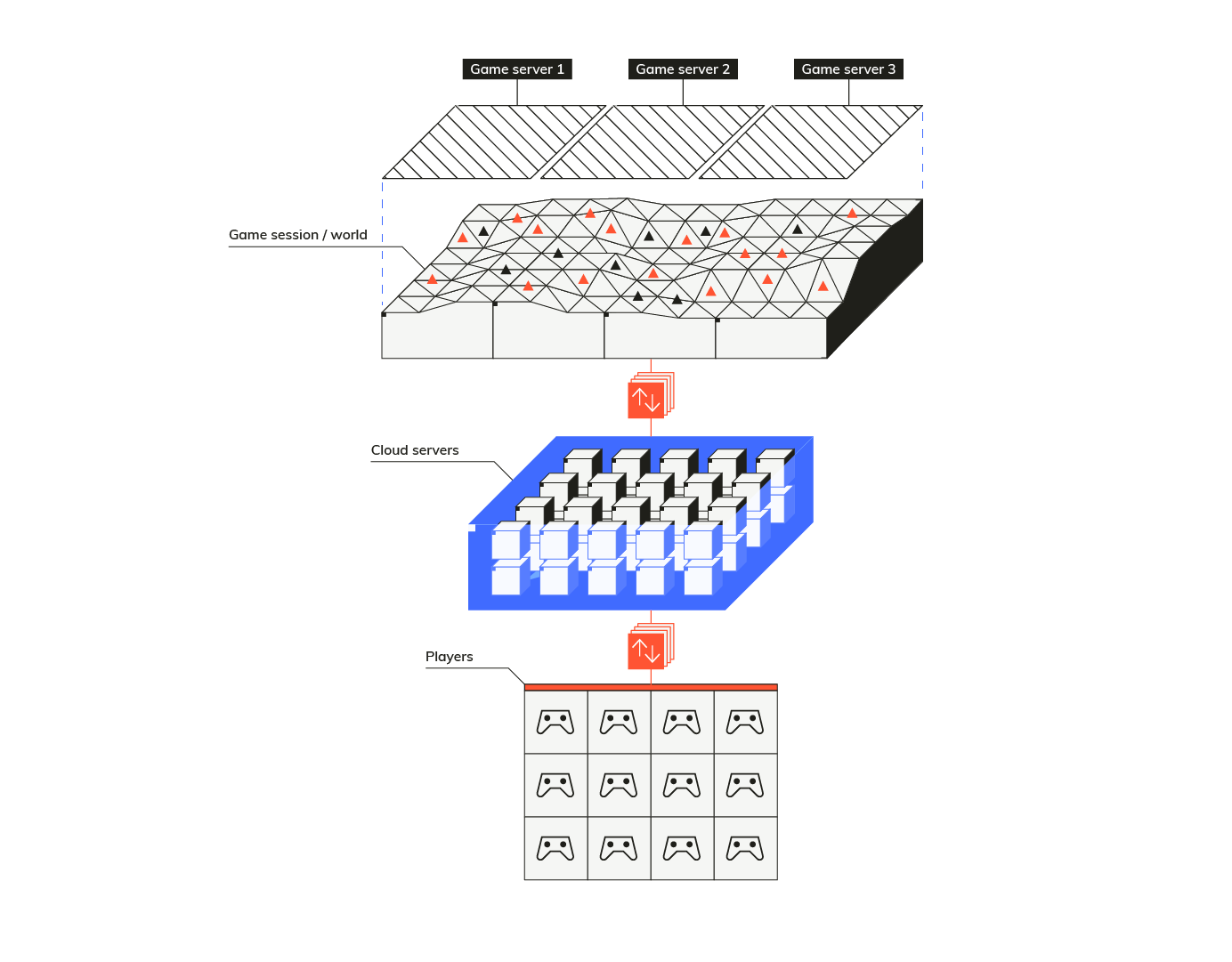 But a flexible architecture requires more than just identifying issues quickly - it requires also being able to change them ahead of the next test. Knowing that there are technical limitations to how much compute they can access on a single server, most developers lock certain parts of their design early in development. You might fix your target player count, for example, or whether you will have any NPCs - and only iterate around those limits.

It’s different on SpatialOS. Included with it is a unique server-side networking stack that lets you keep your design adaptable without changing your backend. If you want to change your small session multiplayer into something larger, for example, you can - exactly like Crytek, who experimented with quadrupling the number of players in The Hunt: Showdown through a simple SpatialOS integration that you can see below.

As Aaryn Flynn, ex-General Manager of Bioware and now GM of Improbable North America puts it, developing without SpatialOS is “like sending a rocket to the moon; you get one shot. Now, we get to go around and around, experiment and test, try ambitious things because we know we can do it quickly.”

SpatialOS supports multiple ways of sharing your game’s computational load, but one method is to offload a set of your processes to another cloud server. This is where you identify resource-intensive game design elements - for example, NPCs, weather systems or loot systems - and set up a parallel cloud server that manages that subset.

That’s how Midwinter Entertainment is building its next game, Scavengers. Its ambitious PvPvE gameplay has multiple fireteams exploring a map, searching for riches and battling each other and NPC enemies, before extracting at a central point. The PvP aspect of this all runs on one server - but the AI for the NPCs is actually running on a separate server, seamlessly integrated by SpatialOS with the main gameplay systems.

Midwinter experimented with several offloaded gameplay systems after they’d built their prototype, but they were happiest with this one - and, as their CEO Josh Holmes attests, they’ll continue to do this throughout development, even after launch:

“Without SpatialOS, we’d have had to make certain decisions at the beginning of the development process about things like player count and AI density, and drive those stakes into the ground, knowing they couldn’t be moved at a later date. A foundation of SpatialOS allows Scavengers to continue to evolve whilst the community is actively experiencing it.”

For more about how Scavengers is using SpatialOS, you can watch our recent Livestream with the Midwinter team, above, where they talk about the process of setting up this system and what the benefits have been for their game design.

Or read our case study, which looks at how they integrated new, more powerful features using SpatialOS-enabled offloading, by clicking the button below.

Get the case study