Dan Griliopoulos is Lead Content Editor at Improbable. This tutorial was last updated 7/11/2018 – for the the most up-to-date tutorial, please visit our onboarding documents.

Traditionally, building a scalable multiplayer game was beyond the scope of a small dev team – the need for hosting, network engineers and the like tended to put people off. SpatialOS’ special sauce is that it takes away a lot of that complexity, but also increases your game’s potential. That’s best shown off by our new Game Development Kits (GDK) – we’ve just released one for Unity and we’ll be releasing the one for Unreal on October 30th, 2018. And included in the GDK for Unity is a 200-person FPS that you can test out today.

For those who don’t already know what SpatialOS does: it’s a platform for creating games that go beyond the limits of a single server, enabling you to implement new kinds of gameplay that would be impossible with the traditional single-server approach. As a fully managed service, it does all of the work required to host, run and scale your game globally while you focus on finding the fun.

This FPS Starter Project is a module (a bundle of code and assets) that adds solid FPS functionality to a Unity SpatialOS game. If you run this code with the SpatialOS GDK for Unity on our servers, you can have as many as 200 players (real or simulated) playing stably at once without paying any hosting fees while you’re developing. In fact, we’ve included all the assets, maps, animations and so on – and you officially have our permission to reuse all of this for your own SpatialOS games, commercial or otherwise.

Today, I’m going to show you how to set the project up, get friends into it (or a bunch of bots) and get a glimpse into the back end, so you can see the tools that will help you manage your virtual world. 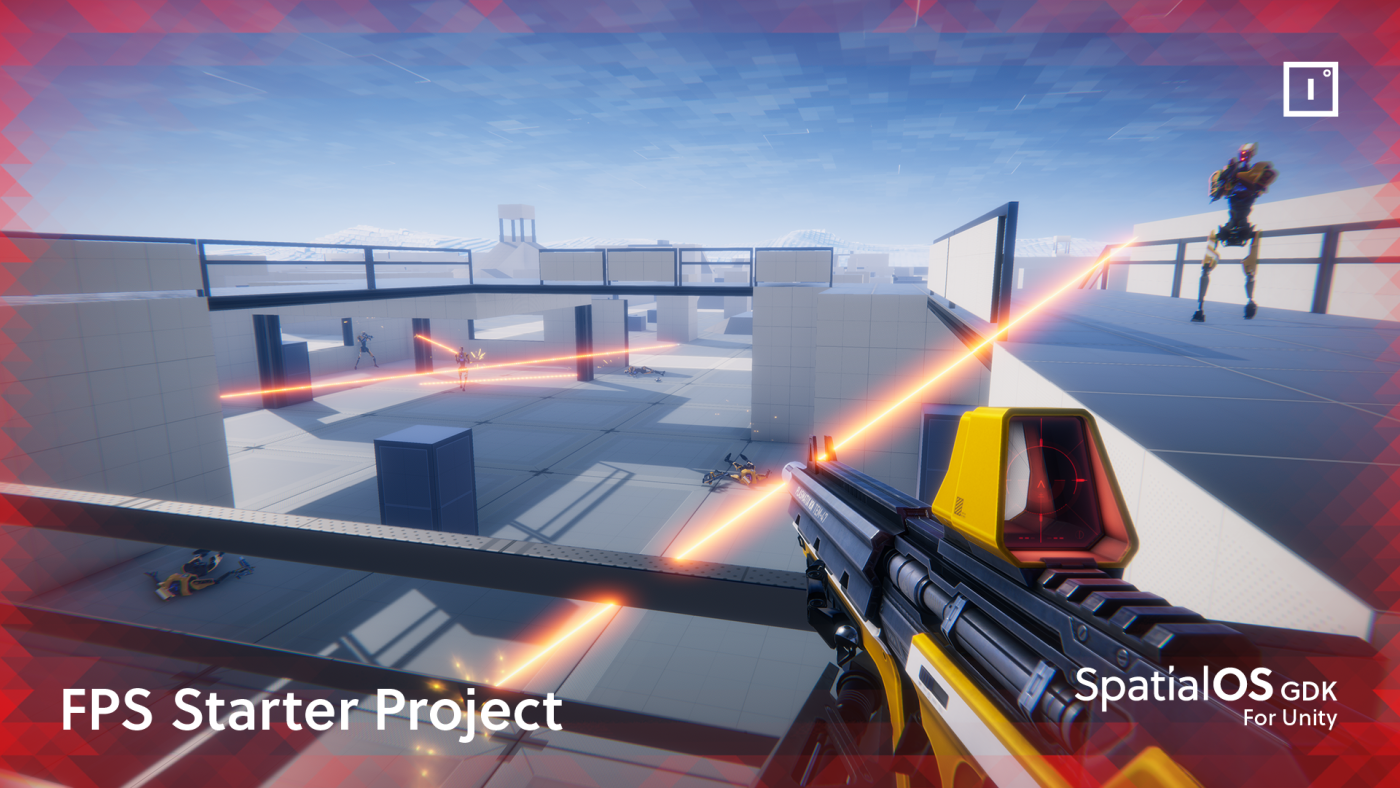 To get started, you first need to sign up for a SpatialOS account. Again, every step of this is free. Then you need to set up your machine with the right prerequisites. (I’m assuming you’re using a PC – there are instructions on our docs for Mac.)

Now you can install SpatialOS. The installer includes the Command Line Interface, the Launcher (for launching game clients), and Visual C++ Redistributables. Next, install a code editor – we prefer Visual Studio or Rider. For Visual Studio, you’ll need to go to the Workloads tab and select ‘.NET Core cross-platform development’, then ‘Game development with Unity’, then deselect any options in the Summary on the right that mention a Unity Editor. Make sure Visual Studio Tools for Unity is included (there should be a tick next to it). For Rider, you just need to install the Unity Support plugin.

Bring on the Clones

Now you need to clone two repositories from our Github: the FPS Starter Project and the GDK for Unity.

Clone the FPS starter project using one of the following commands:

Either this command for SSH

Or this one for HTTPS

Then clone the GDK for Unity and checkout the latest release. From the root of the gdk-for-unity-fps-starter-project repository, run:

You should now be ready to open the project. 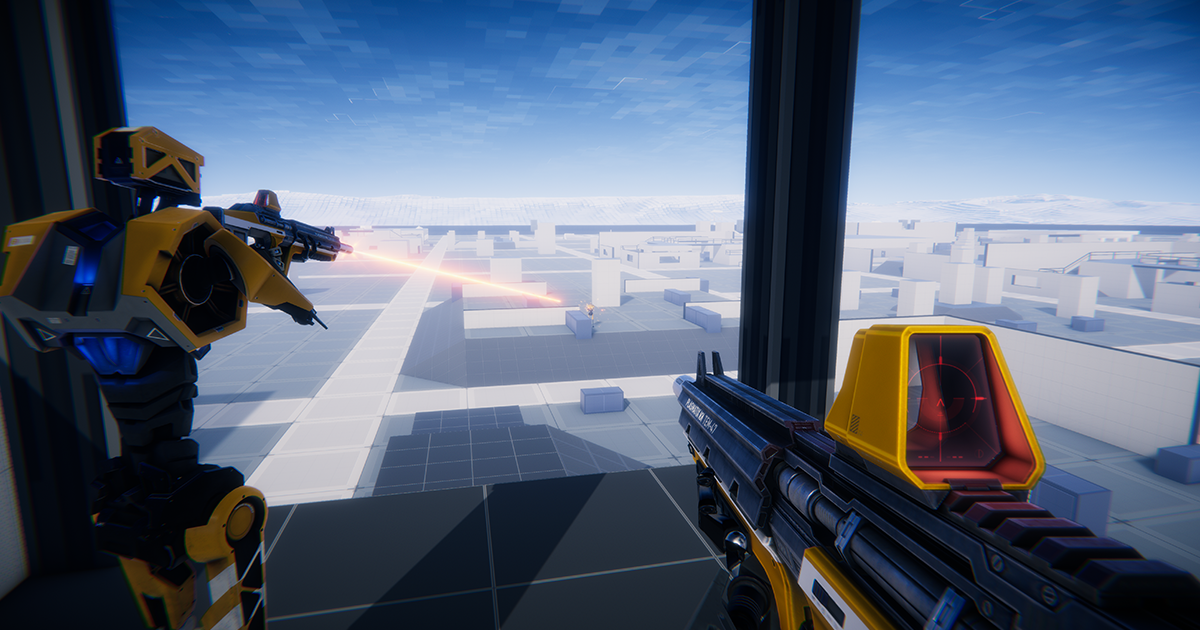 Launch the Unity Editor. It should automatically detect the project; if it doesn’t, select ‘Open’ and then select gdk-for-unity-fps-starter-project/workers/unity.

The next step is to apply two quick Unity bug fixes. First, you need to fix a bug with shader compiling:

Next, you need to fix a Navmesh import bug. To rebake the navmesh:

You can verify that the NavMesh has been baked correctly by navigating to Assets > Fps > Scenes > FPS-SimulatedPlayerCoordinator, and checking that Unity displays the correct icon (a figure walking along a dotted line).

The next stage is to build out the code executables which will be run by SpatialOS servers on the cloud deployment – these are called workers. In the Unity Editor, you first need to make sure Burst compilation is disabled from Jobs > Enable Burst Compilation. Then you can build your workers from the SpatialOS menu by clicking Build for cloud > All workers. 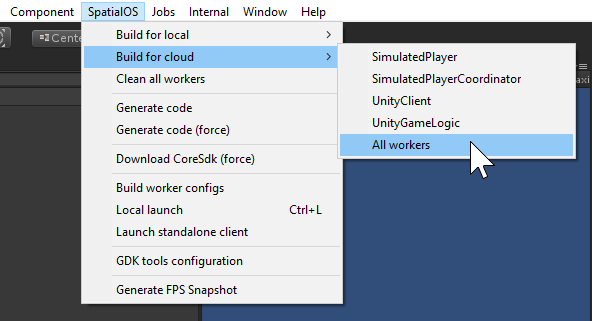 This can take some time – so don’t click away. When the Unity Editor’s Console window says  Completed build for Cloud target you’re ready. After the build has successfully finished, the gdk-for-unity-fps-starter-project/build/assembly folder should contain:

Getting your game online

Now you need to set your project name, upload your worker assemblies and launch a cloud deployment.

To set your name, you need the generated name that was automatically associated with an organisation and a project when you signed up. To find this name enter the Console. It should look like:

Using a text editor of your choice, open gdk-for-unity-fps-starter-project/spatialos.json and replace the name field with the project name you were assigned in the Console. For example, you might replace ‘”name”: “unity_gdk”‘ with ‘”name”: “beta_yankee_hawaii_621″‘.

It’s finished uploading when you see an upload report printed in your terminal output. Based on your network speed, this may take a little while (1-10 minutes) to complete. For example:

The next step is to launch a cloud deployment using the assembly that you just uploaded. This can only be done through the spatial CLI.

When launching a cloud deployment you must provide three parameters:

Using a terminal of your choice, navigate to the root directory of your SpatialOS project and run

where assembly_name is the name you gave the assembly in the previous step and deployment_name is a name of your choice (for example, shootyshooty). A valid launch command would look like this:

This command defaults to deploying to clusters located in the US. If you’re in Europe, add the –cluster_region=eu flag for lower latency. It’s finished when you see ‘Deployment launched successfully’ printed in your terminal output.

Back in your SpatialOS web Console, you should now see the deployment that you just created appear under your project. Select it to get to the Overview page. Hit the Play button on the left, and then launch. We already have the launcher, so ignore the installation prompt, and just click Launch.

Once the client has launched… you’re playing in your own cloud game! But it’s a bit lonely, so let’s invite some friends. From the Console, head back to the Deployment Overview page and select Share. This generates a short link that anyone can access for the duration of the deployment.

If human players aren’t enough for your purposes, then you can add simulated players to the world. These bots are fairly primitive, but they’re useful for mimicking player behaviour in scale and functionality testing. Each one is a Unity Client running in the cloud

To get the legion of enemies started, we will use Worker Flags, which you can find from your web Console’s Deployment Overview page: 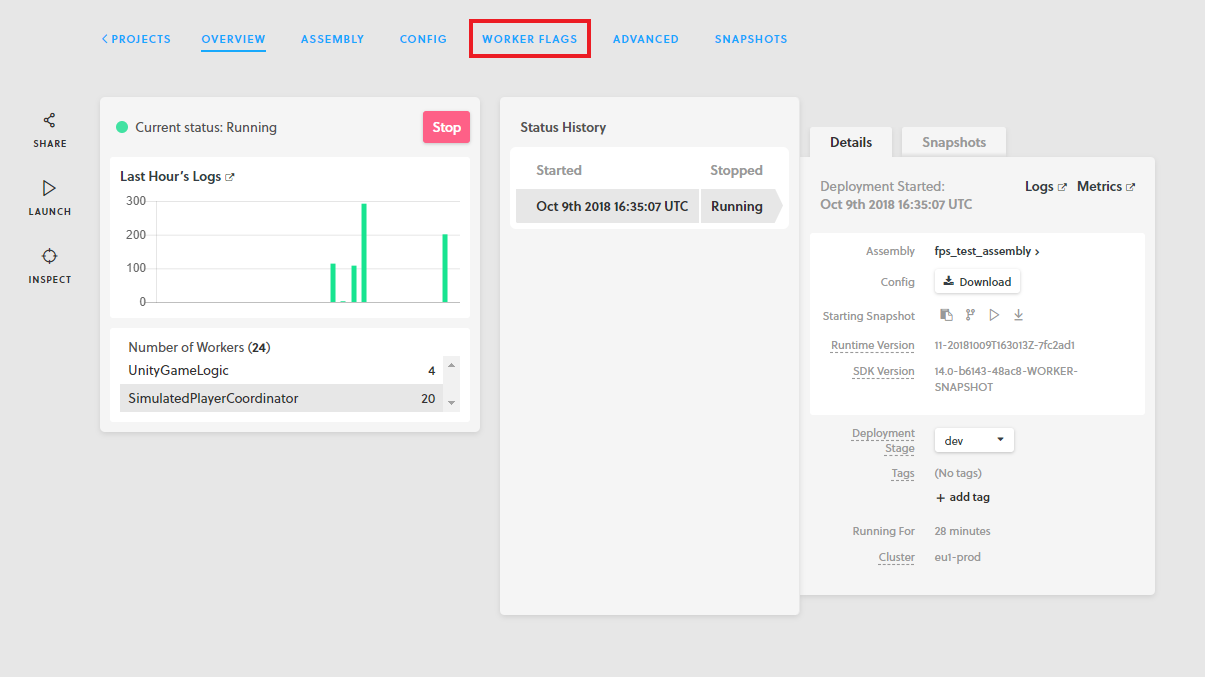 Modify the fps_simulated_players_per_coordinator flag value from 0 to 10 and hit save:

What this will do is start up 10 simulated player-clients per Simulated Player Coordinator worker (of which there are 20 running in the deployment), and they will connect-in every 2 seconds (dictated by the fps_simulated_players_creation_interval flag). Be warned: if you exceed 10 fps_simulated_players_per_coordinator you may experience deployment instability. Go back into your game, and you’ll see the simulated player-clients running.

The World in Action

Head back to the Deployment Overview page of the SpatialOS web Console (shown below) and click the Inspect button. This brings up the World Inspector, which is a real-time view of what’s happening in your deployment, from a top-down strategy game analytics perspective. (I totally want someone to make a Dwarf Fortress style game that uses just the World Inspector…) 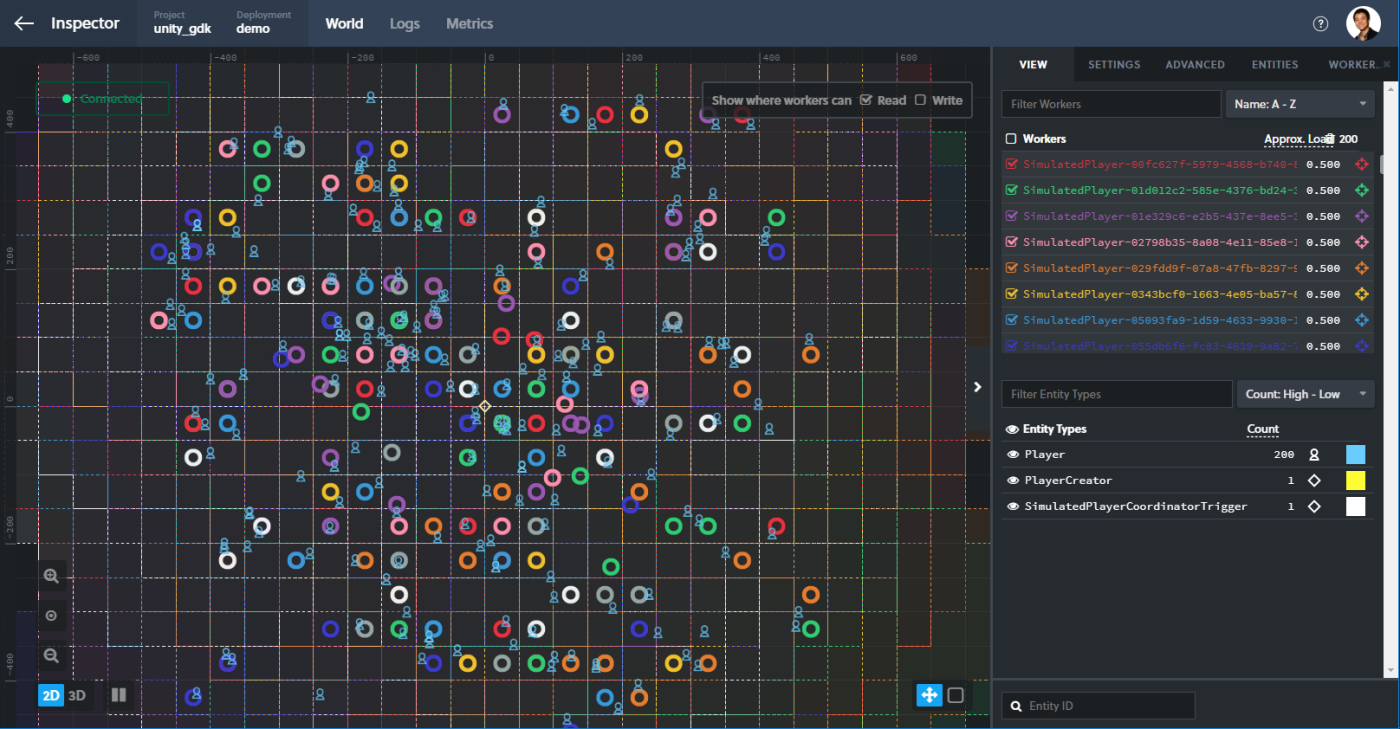 We can use it, for instance, to highlight where all the simulated player-clients and player-entities are in the world (note: not cool to identify where your friends are hiding). 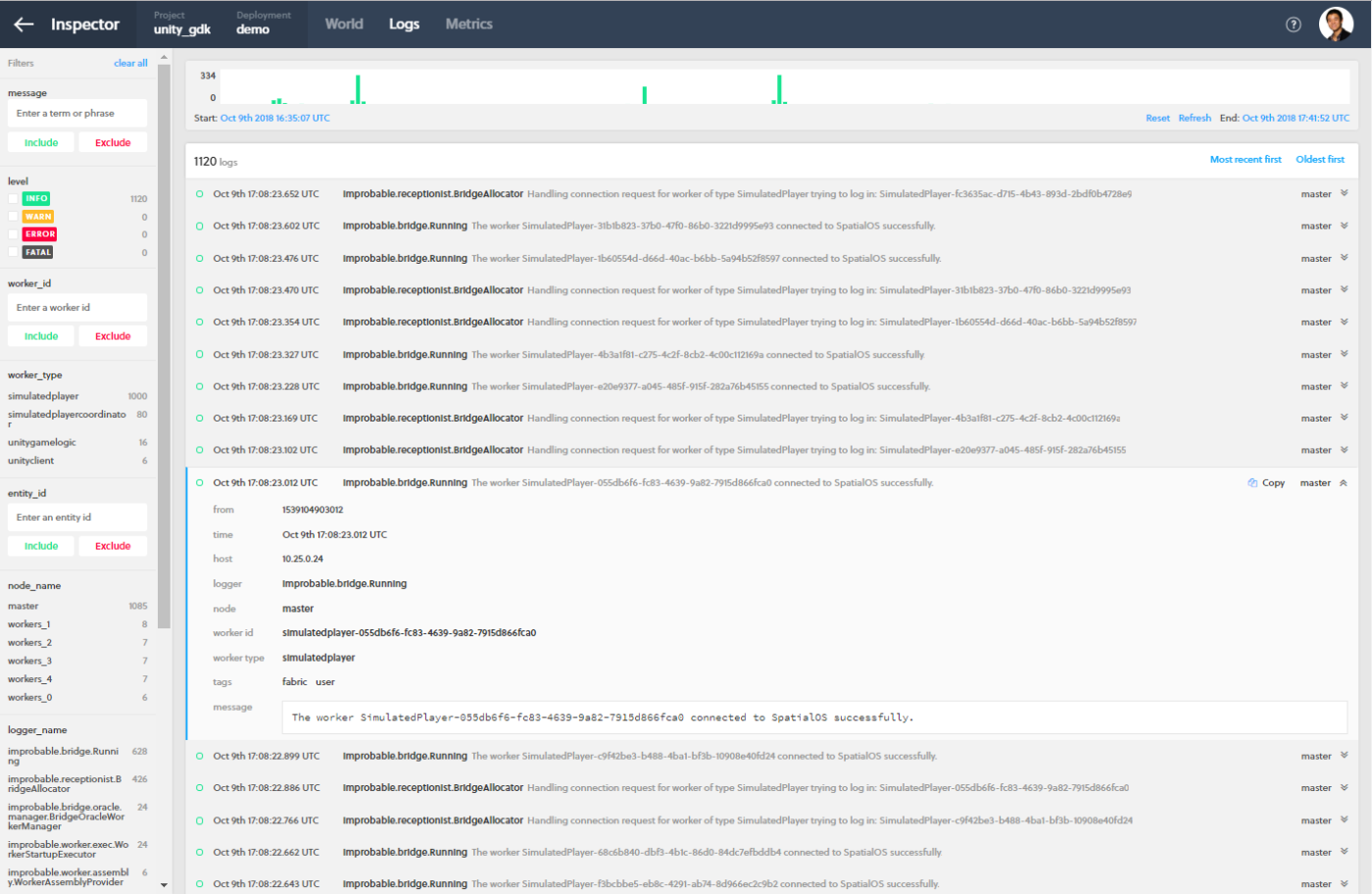 One tab further on is the Logs app which displays all your deployment’s logs (whether they come from the SpatialOS Runtime or the Worker code you have written) with useful filters. And another tab to the right are the Metrics dashboards, which show a selection of useful metrics with annotations to identify the health of your deployment. 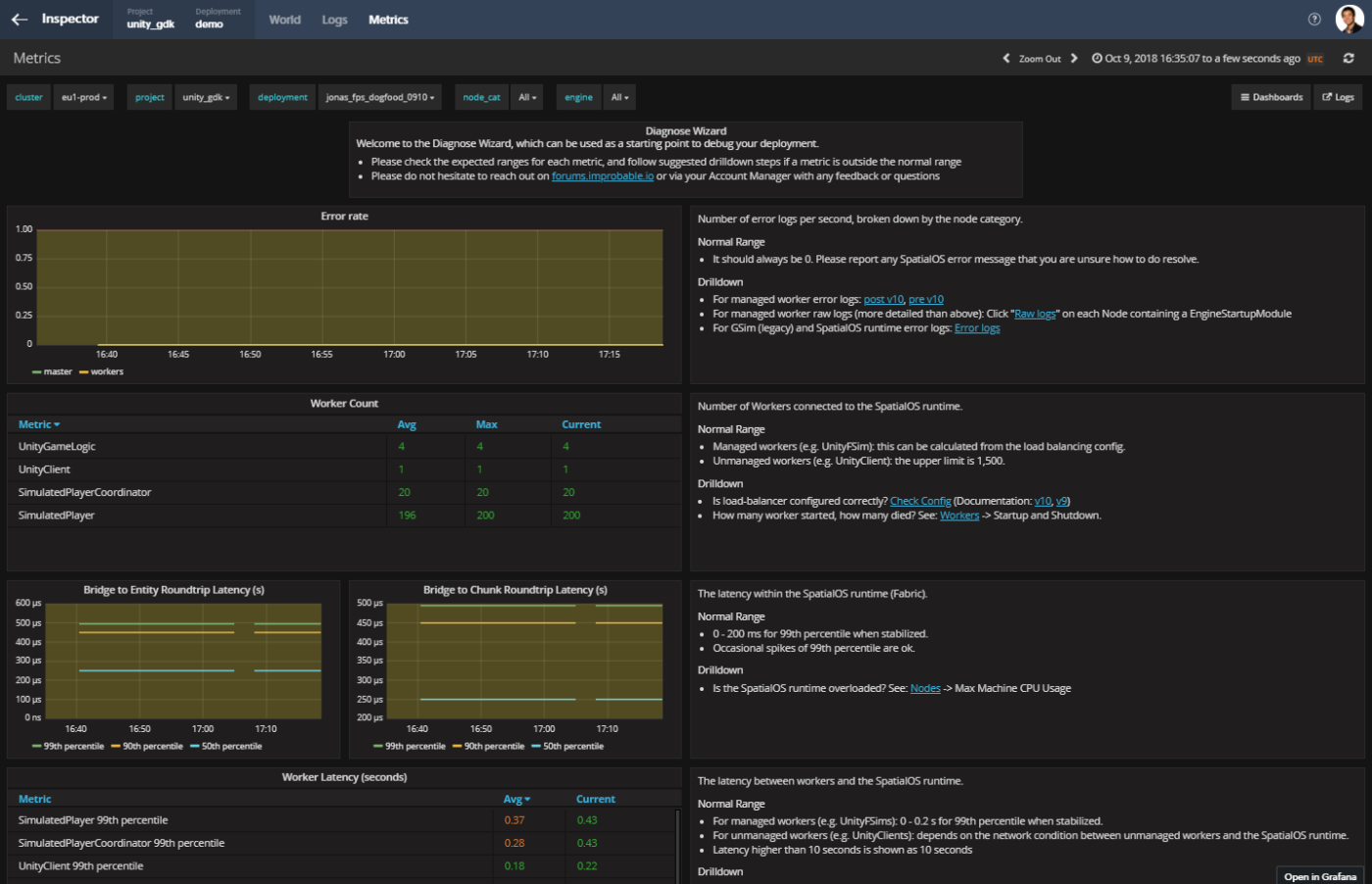 The next step is to build your game! We’re trying to help out with that a little bit, though, by providing Feature Modules – optional features that you can choose to add to your game (player lifecycle, for example). There’s also a tutorial that takes you through the workflow of writing your own feature, health pick-ups – that’s a good next step to get deeper into the guts of SpatialOS.

Other developers are also working on their own projects, building and sharing features – our own Paul Balaji has created a Battle Royale ‘shrinking circle of death’ add-on, whilst Trond Fasteraune (Beyond The Sleep) is working on something to get his Mini-MMO Project Nobody up and running. And Cookie Dragon Games has a working prototype stamina/ammo add-on as well.

For more information about the SpatialOS GDK for Unity, you can go to our launch blog; for more help getting on-board, visit our docs, pop into our forums, or hop onto Discord.